I have heard the saying "you can't go back in time" and of course, I know that has a lot of truth to it.  Physically, that is an impossibility.  No one has invented time travel (that I know of).  But this last week has been a reminder to me of the past and the ability to remember the time gone by is a very powerful thing and perhaps, it is the closest thing we might have to going back in time. 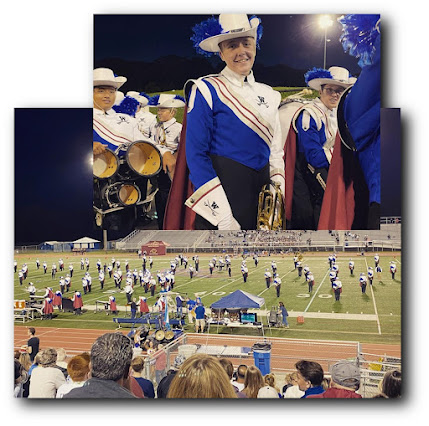 Last Thursday, I was able to watch my oldest grandson, Evan, as he performed with his new high school band.  He played the mellophone, which is a marching band blend of a trumpet/French horn type of instrument.  Evan has really blossomed as an accomplished trumpet player.  It was a trip down memory lane as I recalled the halftime shows we played in high school band.  Not only that memory, but others began to invade my space as I reflected back in time.  I don't want to turn back time, but it was a warm feeling to remember it.

It's Labor Day Weekend.  I have also been reminded of all the Labor Days of my youth - especially my high school days.  You see, for me, Labor Day was always the last blast of summer.  We'd spend that Monday in the small town of Bovey (home of the picture Grace).  The celebration was Labor Day, but in Bovey, it was always called Bovey Farmer's Day.  I would march with one of the three city bands I played in (Marble, Bovey, or Coleraine).  Right after the parade, I would then play in each of the city band concerts played on the lawn of the City Hall.  The day was filled with music.

The music didn't stop there.  Sometime that night, upstairs in the Bovey Auditorium, some local band would be playing the latest hits of the era at the Teen Dance.  I can still hear Edna Kwami (not sure if her named was spelled that way) singing the Jefferson Airplane hit "Don't You Want Somebody to Love" echoing through the dance hall.  The dance gave everyone a chance to see friends that we hadn't seen all summer.  Of course, the dance didn't last too long because the next day was the first day of school.

It's a striking thing to be able to recall those moments of our youth.  It's even better when we can remember them with accuracy.  Farmer's Day was always a fabulous kickoff to the return to school.  I loved going to school.  Riding the bus each day, seeing my friends, interacting with the teachers I liked and even the ones that I didn't (which wasn't a long list, quite frankly), and the beginning of all the activities that brought us all together: Friday night football, halftime band performances, the usual excursion out to the peninsula to gather leaf specimens for biology class, the impromptu class meetings run by the principal, hot lunch, study hall, building the homecoming floats, and countless numbers of other things in which we participated.  When I start to think about all the things we were involved in, the memories become so thick I almost have to brush them away from my mind.  (Isn't it strange how I can hardly remember what I had for breakfast but I can recall events from a half of a century ago with remarkable clarity?)

Next year, my graduating class will gather for their 50th year since graduation - what would Greenway High School do without the Class of '72?  The planning team has decided to have that celebration over the Labor Day weekend.  It seems appropriate to me that date would be the choice.

I hope my classmates will be able to be there.  Like our class song says "But I always thought that I'd see you again" ("Fire and Rain" by James Taylor).

We can turn back time once again! 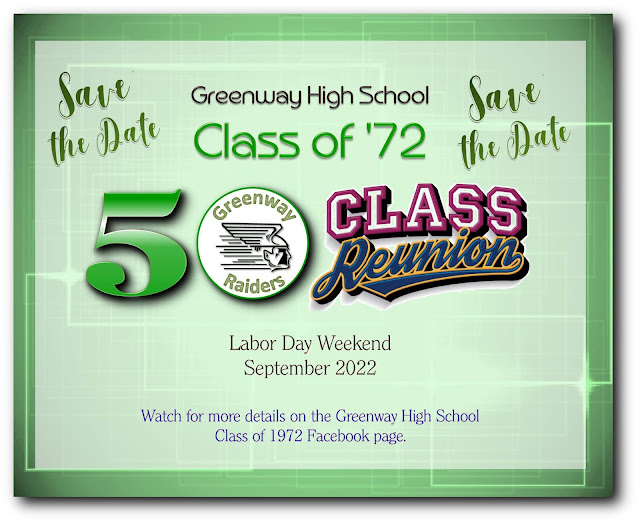 Posted by Daren Flinck at 12:02 AM No comments: