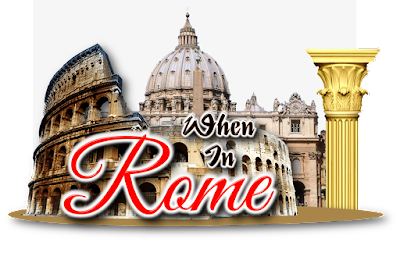 After traveling from Tel Aviv to Rome on Monday, Nancy and I made the trip with Erin back to Rome on Tuesday.  We arrived here in the early evening with our only agenda item being a five hour tour of the Vatican on Wednesday.  I was really looking forward to finding out more about the central location for all things Catholic.  In the afterglow of discovering more about all things Jewish and the beginnings of Christianity, I've been trying to process all of the things that I've learned and seen.  This might take a bit more than a few days.

We scheduled a cab to pick us up and drive us to the USO in Rome, the organization that supports our military women and men by providing many sponsored events that help Americans stay connected while they are stationed in foreign lands.  The tour we were about to embark upon was sponsored and set up by the USO.  The cab arrived on time and we were on our way.

One thing I had rarely (if ever) experienced in the U.S. was a cab ride or a Uber ride.  When we arrived in Tel Aviv, we were picked up by the nicest driver - David was his name.  He was talkative and made us feel welcome and safe in our journey to the Middle East.  The ride back to the airport wasn't the same - no warm, fuzzy experience here.  The driver did not say one word on the 40 mile trip from the Garden Tomb to Ben Gurion Airport.  It wasn't a very comfortable ride.

With that background, we were headed to the Vatican with an Italian speaking cab driver.  No words were offered.  I began to wonder if the language barrier was the primary issue.  That makes sense when you think about it.  As I sat in the front seat, I just wanted to get there safe and sound.  Then something happened that broke the barriers.  The driver reached down and offered me and everyone else a small wrapped candy.  I expected it to be candy or some exotic Italian chocolate.  How nice of this non-English speaking cab driver to break the ice by offering the worlds most universal and perfect food.  I was impressed.  It literally took my breath away.

It did take my breath away because I wasn't an exotic candy or chocolate - turns out, it was a menthol cough drop.

I didn't dare spit it out because I didn't want to offend the driver.  All the way to the USO office, I sat in the front seat with a cough drop in my mouth.  This world is such a strange world sometimes.

The Vatican holds many pieces of religious art and sculptures that tell the story or God's love for all people.  That really surprised me.  We walked through room after room looking at paintings that were over a thousand years old from famous artists like da Vinci, Raphael, and Michelangelo - to name a few.  The pinnacle of our visit was being able to walk into the Sistine Chapel.  When I walked through the sanctuary door, it was the second time today that I had my breath taken away.

The story of how Michelangelo painted the ceiling was told to us before we went in.  I just had no idea how impressive his work would be.  The one particular panel that caught my eye was the center one, the creation of Adam panel where God is reaching to touch man's finger.  I instantly recognized the panel because I saw it in one of the most moving praise songs that I have sung, The Majesty and the Glory.  I've mentioned this before and I'm not afraid to say it again - that song always touches my heart, reminding me of my own humility at the same time how much God loves me for who I am.  Even in my weakest moments.  Even in my darkest nights.  Even in my failed attempts to demonstrate faith.

In all of these things, I know that I am loved.

Knowing that really takes my breath away.
Posted by Daren Flinck at 12:57 PM