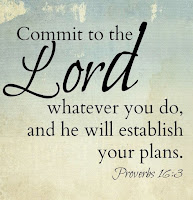 I've always believed the saying "if you fail to plan, you plan to fail." I would never equate my wisdom with Solomon's wisdom, but he echoes this prevailing thought with a divine twist. The first four verses of chapter 16 speak about plans.  In each instance, any human plans need to make some kind of connection with the Lord.

1 To humans belong the plans of the heart,but from the Lord comes the proper answer of the tongue.
2 All a person’s ways seem pure to them,
but motives are weighed by the Lord.
3 Commit to the Lord whatever you do,
and he will establish your plans.
4 The Lord works out everything to its proper end —
even the wicked for a day of disaster.

I know the truth of these proverbs.  I wish I could say I have always followed their advice diligently each and every day.  I think it's because I think I can do it on my own.  Perhaps my actions have that appearance.  Maybe even the result.  But (as I said every so often) I know that whatever I plan to do would be easier if I simply lifted it up to the Lord first, then acted.

I know that more times than not, I'd like to believe that part of my framework implicitly trusts that the Lord is in the plans somewhere.  Maybe that isn't enough.  Perhaps I need to be more insistent in that.  Whatever the case, we are in much a better position if we start with the Lord's leading and guiding.

He is a master planner, after all.